Founded in 2004 by Mrs. Letty Coppel, the Letty Coppel Foundation was created with the objective of improving the quality of life and development of the communities of Los Cabos and Mazatlán.

One of the main goals of the Letty Coppel Foundation is to always support the most needy; People, their environment, what happens to them and their development is what concerns us, as well as promoting sustainable development, culture and knowledge as an alternative to build a better society.

“There is nothing like giving back and having a positive influence on other people, having the opportunity to improve people’s lives is not only a wonderful opportunity, but also a responsibility that we all have, I am blessed to be able to do this. If you do not have a particular foundation to support, I invite you to support the Letty Coppel Foundation, help is always necessary and much appreciated. “- Letty Coppel.

The Letty Coppel Foundation considers, within its philanthropic actions, three main areas through which it seeks an environment that promotes the quality of life of the members of the community. These areas contemplate:

All these centralized philanthropic efforts through the Letty Coppel Foundation achieve the development and continuous improvement of our communities.

“All the gold in the world means nothing, what endures are the good actions we do for our fellow men” -Adolfo Prieto 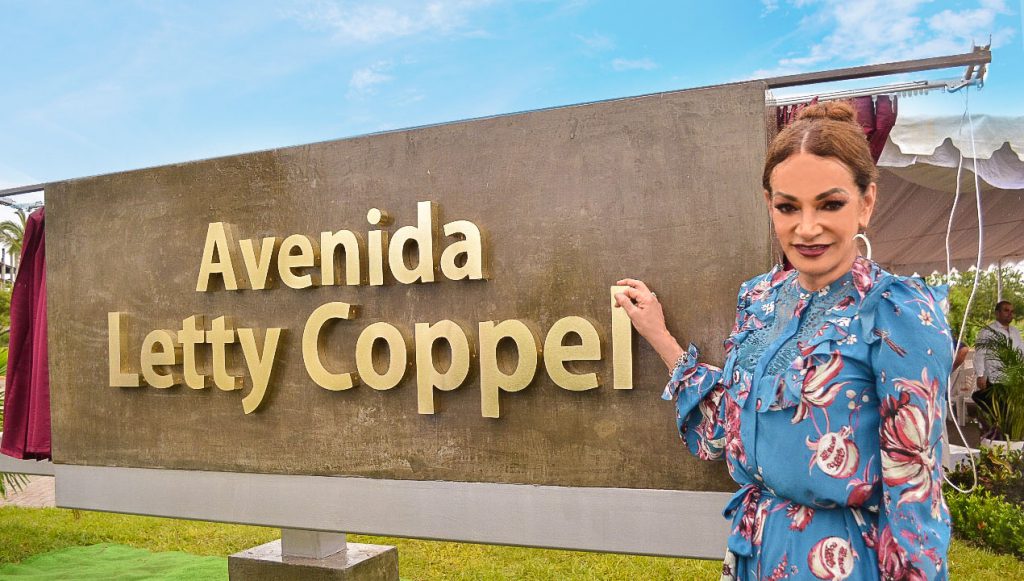 Born in Monterrey, Nuevo León, the fourth of eleven brothers, Letty Gonzales knew at the age of 14 what it is to work to help, since she suffered the abandonment of her father and had to help her mother to support the family, a fact that without place forged his character.

A great reader, devoted to exercise, healthy eating, her family and the nourishment of the body and spirit, she is the owner of a security that allows her to face any adversity and achieve great challenges.

In 1973 she changed his residence to the city of Mazatlán, and with his three small daughters Lety, Hayley and Babara Coppel Gonzáles, to whom she worked full-time. Mazatlán became his second home and the place of the unforgettable friends with whom she still maintains contact.

The growth of the Pueblo Bonito Hotels, of which she is co-owner, made her go again in search of new destinations, this time in the Peninsula of Baja California Sur, specifically in Cabo San Lucas, where she has seen her best stages of professional success. And the place where her daughters left to start their own family.

In 2004 and based on the philosophy of the Monterrey philanthropist Adolfo Prieto “All the gold in the world means nothing. What endures are the good actions we do for our peers “decides to create the Letty Coppel Foundation, to help those who need it most, institutionalizing and formalizing the altruistic work to which they have always dedicated a great part of their time.

The Letty Coppel Foundation is the materialization of Letty Coppel’s dreams and wishes. Since her youth she was focused on assistance and social welfare activities. In her native city of Monterrey, she went to rehabilitation centers, nursing homes, shelters, to support activities, to talk with the people who were there.

Her decision, dedication and high altruistic spirit makes her maintain her objective of positively impacting the lives of children, youth, senior citizens, and families, and why not, of entire communities throughout the country through its Foundation.

2011: National Prize for Voluntary and Solidarity Action 2010 for its altruistic work through the “Letty Coppel Foundation”

2011: Recognition by ECOSOL: For the certification or management of hazardous industrial waste.

2011: Recognition by Mexico Secretariat of the Environment and Natural Resources for the Group’s support for World Environment Day.

2012: Recognition by the Mexican Red Cross to Letty Coppel Foundation for: Their sample of team work, professionalism, commitment, delivery. For their invaluable contribution to our daily activities.

2013: “Woman of the Year” for her altruistic work for the benefit of the needy population of Mazatlan through her “Letty Coppel Foundation” “supports the most vulnerable.

2014: Recognition by the City Council of Los Cabos to Letty Coppel Foundation: For their total support and essential architect in the joy to the people of Cabo San Lucas in the framework of Traditional Festivals.

2015: Recognition by the Cabo San Lucas General Hospital to Letty Coppel Foundation: For its contribution to the fight against cancer.

2016: AMMJE Association (Mexican Association of Women Entrepreneurs): Medal of Heart for their altruistic work through their “Letty Coppel Foundation” and their trajectory, talent, dedication and dynamism.

2017: Appointment of “Letty Coppel” Avenue in the Mazatlán Marina road in the city of Mazatlán. The appointment was rightly their altruistic activities through its “Letty Coppel Foundation” which supports people of limited resources and civil associations.

2017: Recognition of Mrs. Letty Coppel by the City Council of Mazatlán and the Municipal DIF System for her contribution with the “Trailer of Health for Women” through the Letty Coppel Foundation, which works to prevent the health of Women of Mazatlán against breast cancer.

2017: Recognition of Ms. Letty Coppel by the Mexican Association of Women Entrepreneurs Chapter San José del Cabo, A.C. as an Honorary Associate of this chapter.

2017: Recognition of the Letty Coppel Foundation by the Government of the State of Sinaloa, the Secretary of Public Safety in the Directorate of Prevention and Social Rehabilitation El Castillo Penitentiary Center for its invaluable work and support that has been carried out in this Penitentiary Center for the benefit of the population deprived of freedom.

2017-2018: Beneficiary of Letty Coppel by the DIF Mazatlán. It is worth 208 smiles from the DIF family and a million more from the people that we will help with your support.

2017: Recognition of the Civil Protection Agency of Mexico for support in natural catastrophes

2017: Appointment by System DIF Los Cabos through the Coordination of the PAMAR Program (Program of Attention to Minors and Adolescents at Risk) as: Promotora de los Derechos de los Niños for its outstanding work in favor of the children of the municipality of Los Cabos, BCS

2018: Recognition of Ms. Letty Coppel by Los Cabos Unidos por la Discapacidad: For her altruistic work for the benefit of people with disabilities.

2018: Recognition of the H. City Council of Mazatlan and the Municipal DIF System.

2018: Recognition of H. XII City Council of Los Cabos through the Municipal System for the Integral Development of the Family in San Jose del Cabo B.C.S.

2018: Recognizing the University of the Gulf of California “Honoris Causa” UGC.

2018: Recognition Network of Organizations for Disability care in Mazatlan.

2019: Recognition of the Government of the State of Baja California Sur.

2019: Recognition of the City Council of Los Cabos B.C.S.